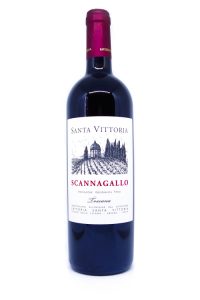 Scannagallo Igt Tuscan Red Super Tuscan Wine
Appellation: IGT TUSCAN RED SUPERTUSCAN WINE
Varietal: 60% Sangiovese, 40% Cabernet Sauvignon.
Winemaking: As for all the others wines we produce we do the hand made harvest. Scannagallo after matures 12 months in French medium toasted oak barrique.
Description: Intense ruby red colour tending to garnet with the ageing; persistent to the nose with scent of red fruits and spicy tones of pepper and coffee with full body and persistence.
What makes up a Super Tuscan? In addition to wines based on the Sangiovese grape, many well known Super Tuscans are based on a “Bordeaux-blend”, meaning a combination of grapes typical for Bordeaux (esp. Cabernet Sauvignon and Merlot). These grapes are not originally from the region, but imported and planted later.

The Unofficial Star of Italy: Super Tuscan Wine. The term Super Tuscan was coined in the early 1980’s to describe a red blend from Tuscany. What makes “super Tuscan” wine different from other Tuscan wines (like Chianti) is the use of wine grapes that are not indigenous to Italy.
What is a Super Tuscan wine? “Super Tuscan” is a term used to describe red wines from Tuscany that may include the use of non-indigenous grapes, particularly Merlot, Cabernet Sauvignon and Syrah. The creation of super Tuscan wines was a result of the frustration winemakers had towards a slow bureaucracy in changing the wine law of Italy during the 1970’s. Winemakers began mixing ‘unsanctioned’ wine varieties (like Merlot) into their blends to make high quality wines. The legal system eventually yielded in 1992 with the creation of IGT, a new designation that gave winemakers the ability to be more creative.
How to Identify an IGT. There’s a bit of a misnomer as to what a super Tuscan wine is because the flavor profile ranges quite a bit. You can find everything from fruity and racy 100% Sangiovese-based wines to deep, opulent Syrah-based wines. What ties them together is the use of the Toscana IGT classification and this notation will always be on the label.
Another strange but effective way of sussing out a super Tuscan on a wine list is to look for “named” wines. Named wines have parentheses around the names, such as Luce Della Vite “Lucente” Toscana. Many producers use an original name instead of a variety (e.g. Sangiovese) or region (e.g. Brunello di Montalcino) name on the bottle. If you know a little Italian, you’ll be able to pick these out without any difficulty. Veni, vidi, vici!
Why do we call them Super Tuscans? Super Tuscan is a phrase that was coined in the early 1980’s. We asked wine critic James Suckling where the term may have originated. He said it may have come from a number of sources including the famed Luigi Veronelli, an Italian wine/food writer and intellectual, or from Burton Anderson, a writer who moved to Tuscany in 1977 to write about its bright future, or it could have been David Gleave, a Master of Wine and one of the UK’s leading experts on Italy. Regardless of who coined the name, producers in Italy were turning heads making wines that didn’t fit in!